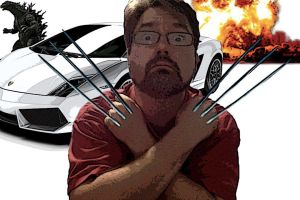 NOT IN THEATERS NEAR YOU, DECEMBER 2017

We need your suggestions for a title for this new fake movie, where I play a slightly deranged and somewhat genetically altered superhero whose team includes a magical but comically overweight Japanese dragon named Puff who has been personally responsible for 870,000 acres of forest fires across Montana and is getting chased by Smokey the Bear in a helicopter; and also a Wiry Little Italian Getaway Driver named Lil Caesar who used to drive Indy cars until a pinkie injury put him out of the action, but whose primary source of income is now flipping little porcelain figurines he buys at garage sales on Ebay with his mad hacker skills and drinking himself to death until he meets a top level espionage recruiter from a secret joint task force of the CIA and whatever Italy’s secret spy organization is called (who cares, it’s an Italian phrase you won’t remember after the movie, you’ll just remember that it was a really famous actor whose initials start with Samuel L. Jackson playing the cameo role of the spy guy who recruits other spy guys). SLJ introduces us all to each other in an underground cave thingy that’s ridiculously deep, it takes like half the movie to ride the elevator down, but thankfully they are playing Led Zeppelin instead of normal muzak and we get to talk with SLJ about how much the French would love Whitecastle’s Sliders if they had a chance to try them and how he got his eye poked out again, why does he keep doing that, doesn’t he know he shouldn’t run with scissors, and once we’ve been introduced we are led out the back entrance that is in an abandoned warehouse which is somehow not two miles deep in the earth’s crust, and we have to go through those natural squabbles that come with language and cultural barriers between an American life coach turned triple-agent, a depressed Japanese dragon exiled in Hong Kong where he doesn’t understand the culture, and an Italian thief/stuntman/hacker/ basically-not-muscly-superhero-character who wishes he could put on a few of the pounds Puff can’t seem to shed no matter how often the chubby lizard goes to Zumba. Once we reconcile those differences and see the value and gifts each one brings to the team, and realize that we can all pass ourselves off as Chinese, the three of us finally team up to blow stuff up on the Island of Sodor, where Thomas the Evil Tank Engine is rolling his obnoxious eyes at the poor screen writers until they lose the plot thread completely, which is his nefarious objective, thereby subjecting millions of action-movie fans to exactly what they came for, a movie without any real plot, but finally (spoiler alert) Thomas is dispatched by a totally anticipated and unoriginal plot twist that employs a combination of my brain coming up with a creative plan, Lil Caesar’s car-driving/hacking ability (he may just get over that pinkie injury yet!) where he drops off a letter for my Grandmother at the only mailbox left in the city which tells her where to ship my remains should I fail to emerge from the ensuing danger, and finally (back to Thomas’s lair) a massive fart from Puff who has been eating pizza with some turtles and a rat somewhere in the tunnels under New York City even though the movie is set in Hong Kong, who cares, it’s a big fireball, huzzah, we got Thomas now.

Puff isn’t self-conscious any more about his weight and Lil Caesar decides to focus on his pizza pizza delivery career and stop stealing copper pipes out of basements because with Puff around there is a spiking demand for Italian meat pies with extra cheese, even in Hong Kong. Plus Trinity seems to be pretty hot for Lil Caesar and he wants to stick around and see what happens in the Matrix when it gets rebooted. And I go back to blogging about serious topics (until next time!)

We just can’t figure out what to call this movie and we’re sure with the right title it will be a hit. At least on Redbox. The winning suggestion gets to be an extra in a really cool scene but the producer won’t let me tell you which one but I just have three little letters for you: SLJ. Good luck!

All credit to my 12 year old for the movie poster.

One thought on “Coming Soon To Theaters!”