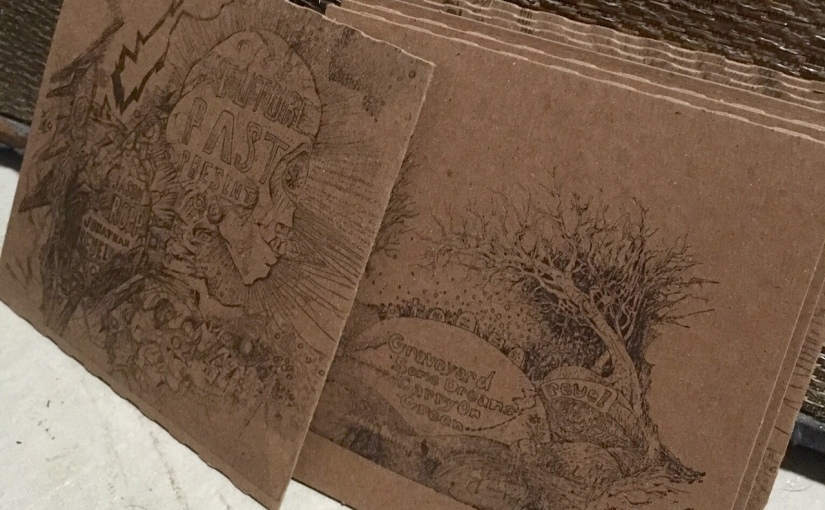 As an entrepreneur it’s easy to get lost in my own world. I’m engaging my business with a great deal of focus. When I do get a break, it’s often the world of literature where I find a breath of artistic fresh air. So being asked to review music by my good friends Jason Ropp and Jonathan Reuel was a jolt into a different world, because the opening riff grabs you and makes you sit up straight.

The first piece is not just two guitars. It is a composition for guitar, that’s what brings me into a different world. It’s a sad sort of feel, reminds me of Hawaiian slack-key playing, and a bass line surges up at you like a wave swelling up on the beach, then smoothing out, washing you up to your ankles, or your chin. No matter how deep you are, you’re at least a little bit wet. Then Ropp jumps in with some vocals. Those guitars carrying you back up the beach, Ropp’s voice just confirms which way is up and which way is down as you body-surf through the first track. If I’m drowning in this first track, called Graveyard, it might be a good way to go.

For Some Dreams, Reuel starts with a little growl, “Arright” like a bear waking up from hibernation. When was the last time he put together a record of any length, with anyone? Seems like he must be hungry. The guitar is plugged in, but it’s a sound clean enough to eat off. There’s something about this track that makes me think it’s what you’d see if you saw Paul Simon’s song Graceland in a mirror, or in a reverse negative photograph. There’s no frenetic pace, there’s no drums. There’s no attempt to go find a place where you’ll be accepted. Instead, there’s a sense of being stationary and accepting yourself and what’s come your way. Reuel asks us to embrace our dreams and climb right where we are. I would have liked this song with a fuller band, it’s very stripped down, but within the scope of this recording it fits, and allows you to engage the poetry, which is the point.

Ropp’s approach to the vocals in Carry On have a little Springsteen in them. Perhaps the train has begun to move again, and one of these two vagabonds grabbed a harmonica to mark their motion.  We carry on even if we don’t want to go anywhere. If the train is moving, it’s going about as fast as you could walk alongside.

Finally, we get Reuel singing Green while Ropp plays the piano, and we get this anthem that gives us a feel a bit of the Beatles’ Paul McCartney, crossed with what you’d hear if you went to a Mennonite church specifically to listen to what the church bulletin would call “special music.” That may sound like an insult, but really, if McCartney or someone remotely as talented came to play that interlude, the Mennonites would appreciate it many times more than they would appreciate anything Warhol did. “Special Music” is a showcase piece that allows a single, talented Mennonite musician to do a performance piece you’re not supposed to sing along with. That’s a big deal. It takes a lot to keep the Mennonites from singing along. The entire EP feels like maybe you shouldn’t sing along, but rather use the space to contemplate motion and lack of motion, growth and decay, the green of leaves and the red of blood, in a way that doesn’t leave you wanting to run away, but to simply hold your ground and climb up the tree or the wall or surf the wave that came your way.

The Mennonite goes to Hawaii, perhaps to do a DTS, or to Saipan to work with MDS (if you know what that means, you’re from his world, if not the explanation would be anticlimactic) then returns home to sit and look out his window. They may be about to bury his grandfather, or his grandmother. It will be hard. He should stay home to help out. Helping out is important. It’s more than helping. Helping OUT means staying in your place. It’s a noble thing. Godly. He realizes that this place is really what he dreamed of after all; it will be more challenging after all to stay at home and live out his calling. A dream of simplicity, like a dream of borcht. He might go away, he thinks about it, and after thinking he might even board a train, sit in a boxcar and think about leaving, even roll with it for a few yards, listen to that lonesome whistle and all, and finally decide that the best place to be is at home, with his people, in a country church where they’ve allowed the piano (and this sound is genuine, the sound of that piano in an austere room)… but perhaps he’s had to leave his guitar in the boxcar. Well, that’s all right. Home is home. It’s the best place to share your gift. He stands up and sings three hymns and then goes forward while they pass the plates, humbly shares his gift, standing by the pianist, not really facing the congregation, singing to the window, and they have that funeral, and they sit down to eat together and celebrate life.

Of course these are only the feelings the album conjures in me. This has nothing to do with the lyrics. Not directly.

Why should you buy this album? It’s time to experience the world of Special Music without going to a Mennonite church and listening to the sermon. You might find it better than church. You will find yourself thinking “I wish I could just sit and think about this without being interrupted by the sermon or whatever comes next” but of course someone will come along and share their opinion with you soon enough.

***I was not paid to write this review.