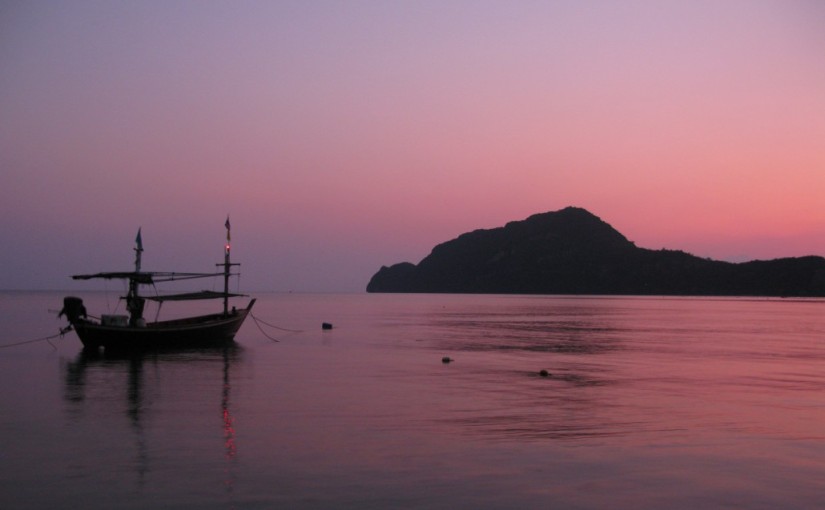 Previously in the series: 1. Fusions in the Void; 2. God and Darkness: The Future; 3. Resting and Motion: Power. See archives.

Watch a bird of prey sitting still. Their head bobs now and then. They are taking a rapid sampling, triangulating the depth of field of their vision with one eye. Our eyes, both in front of our head, make an automatic triangle (two eyes plus the object make three points) with whatever we’re seeing, and that triangle is what gives us depth perception. We can tell how far away something is without bobbing our heads. Eagles have to read two points with one eye, so they bob their heads to get a reading.

Butterflies and moths do this with their olfactory nerves. Their flight patterns seem odd and irregular because they are doing the same thing that birds of prey do: taking readings from two different spots, then redirecting based on their sense of distance to the next flower or mate.

The Void is a place where distance and closeness blend into each other. We feel when we are in a spiritual and psychological space of blindness that we have no vision at all. We are, in the present moment, unable to sense either distance or closeness, but paradoxically, we are both far and near from our objectives, our goals, our dreams.

God is developing vision in something very much like a photographic darkroom. For things to come together when the lights come back on, a photograph needs darkness to develop. You may feel that you cannot see six inches in front of your face, so distance and closeness have fused to the point that life itself is imperceptible.

This same thing happens when we close both eyes to sleep. We rest, we prepare our minds for vision. We dream, in our sleep, refocusing our energies and psyche for the next day. It is in this not-seeing state, this Void where distance and closeness seem to be lost, that they actually fuse together, allowing our spirit and psyche to triangulate and find depth and direction. One day, when the Void moment (or decade) is over, we open our eyes and we see the path clearly. The Void has allowed our picture to develop, and the lines are sharp again. This is the hope the photographer has when she turns off the lights in the darkroom and begins to work. This is the hope the eagle has when he scans the ground for prey from his aerie. This is the hope that the spiritually yearning voyager has when nothing is clear, and nothing feels comfortable — the closeness pressing, the distance vacuous: This hope is that in the Void, Distance and Closeness are fusing to create Vision. Dawn will come no matter how long the night may seem, no matter what terrors the dark may hold.

When our body makes a move that uses strength somehow, there are muscles working and muscles opposite the working ones which are at rest.

A muscle’s fibers fire in contraction to make something happen, but when they all fire and stay locked on, we get a cramp.

In the Void, motion and rest are fusing to create power. There’s a tension which happens in our spiritual and psychological “muscle memory” and it’s that tension we feel before the gun goes off in a footrace. Perhaps we are about to take off on a dead sprint, or perhaps we’re preparing to run a marathon. Either way, anyone who has ever run a race knows the jittery butterfly feeling in the pit of your stomach, the eagerness to begin, the power welling up within, the sensation that any amount of speed will be possible. During the Void we sometimes feel powerless because we aren’t yet active, we’re being held back. Sometimes, we feel like a racehorse who is being shoved into the gate: we don’t like the confinement that comes with the moments of preparation. We’d like to just run without waiting for the starter to open those gates. Each muscle, however, must find a moment of rest, a moment when we store up energy for the thrust of that first step.

In the Void, when we feel psychologically and spiritually depressed due to a lack of motion, what’s really happening is a fusion between the resting moment and the tensing of the muscles (spiritual and psychological muscles) which are preparing to jump forward. The fusion that happens here stores up power.

Another way to think of it is the way a jet engine revs before the pilot releases the brakes, right before takeoff. You can feel it in your seat way back in economy. The entire aircraft tenses. The jets begin to build but the brakes keep you from leaping down the runway prematurely. Only when the jets have warmed up, sped up to the place where the power is enough to launch the aircraft into the air will the pilot release the brake and allow the craft to sprint down the runway. There is a little Void in that moment, a void where power is built, where resting and motion collide to create power.

Then: POW! Off you go. When we’re in the Void our desire is to move, but God is saying “not quite yet” holding the breaks, and so, like a thoroughbred who prefers not to be confined, we buck and back off from the gates, only delaying the start we are eager for!

The Void is uncomfortable in this way, (and it can last for several years) but something is happening here, fusing. It can be an exhilarating moment as well. Hold steady, let the muscles relax even as they tense: somewhere in this paradox, in this fusion, your moment will arrive. Hope for your best race yet. Hope for a beautiful flight.

This is the second in a series of essays on Fusions in the Void.

Time stands still in the Void. Everything that may have been is not yet. Everything that could be isn’t beginning yet. Living in the Void is like an attack of living in the present. Yes, we hear from wise sages about how living in the present is this glorious thing, but right now it sucks. It’s not what we want, though we know we should want it, and so it becomes an ever-present reminder in and of itself of how disconnected we are to both our own past (which is supposed to be forming us into something, even the bad parts of our past) and disconnected also to our future, all sorts of dreams on hold while we sit, our vision set up on a shelf like a can of sardines which nobody wants to open for fear that it will stink. Even ourselves (pretend that you love sardines for the sake of this argument) even we do not want to open what we, perhaps uniquely and alone, may really want. We can’t get it because we can’t live in the present, because even though we want to, we don’t want to. It stinks, all of it, like a primordial pool of fertilizer.

God-self is fusing with the darkness itself in the Void. God has decided, after many aeons of not-past, not-present which contained not-future, to draw a line in the sand, that everything before will now be thought of as “past” and everything to come will be considered “future” and yet God’s Spirit is hovering over the waters … in the moment. Stirring, perhaps, a pot of gruel or a pot of pourri (what the heck is pot-pourri?) or a pot of something. The first thing God creates is time, and God does this by being in the moment with the Darkness. God encounters Darkness in the void and in that very act God creates The Future. “In the Beginning” it says, “God created the heavens and the earth.” But by the very words “In the Beginning” we can see that the first creation is time itself. Followed closely by heavens, earth, and water.

What is the first thing God and the Void are coming together in creative, motion-based fusion to create? Your future. You could be in a deep depression, you could be in such a Void you can see nothing. But time is literally on your side because by its very nature it includes not only a past or present. “But my future looks so bleak!” Right. That’s because in the Void you cannot see anything. At all. Everything has come to a halt. Mystically, in the Void, even the future itself seems not yet to exist. It is only an idea that God has not yet had. Sure. That’s what it seems. I get that. But the future is really the first creation of all, and it comes with a side of hope; hope that there may be ice cream for dessert. The past, too, may seem not to be leading anywhere good. All your momentum headed in the wrong direction. The present just Void, dark, the future, if it’s a continuation of what has been, worthless. But this is not so. God fuses with the Darkness to create future. Hope that it will be worth seeing. The future is the sun rising in the east, again.