You’re leading a team: could be you and one child, or you and a sales team, or you and a massive corporation or nonprofit institution. In any case, you have a culture you want to build, values to instill. But how?

For the last few months I’ve been blogging less as I was working to refine a concept into a concise e-book which details my formula for making a positive cultural impact in the form of a cycle which I very creatively decided to call the Cultural Impact Cycle. 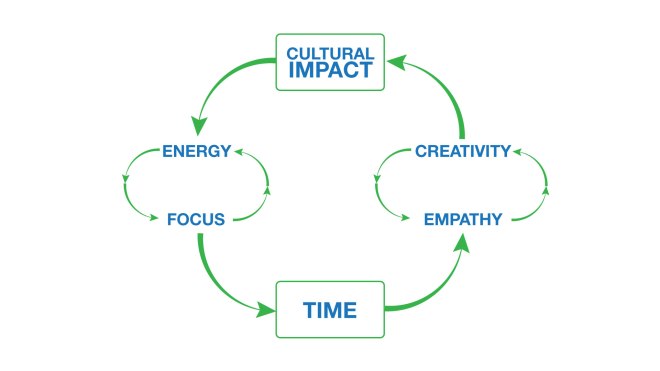 Last Friday I published this e-book, reasonably priced at $2.99 USD. Here’s the link: How to Make a Positive Cultural Impact.

In a recent discussion with a random stranger, I told the stranger I am a life coach.

“What do you teach people?” he asked.

“Coaches don’t teach… but I’m also a writer,” I said, and proceeded to give him the elevator version of the cycle and the book.

Yes… it’s simple. The concepts here aren’t complicated. It’s implementation that may be difficult… perhaps even challenging enough you’ll want to work on them with a coach.

There’s more to come. Soon I’ll have a video course available for purchase that includes a workbook and an online forum. In the meantime, you can check out the book itself, it’s a short read at 8,300 words. 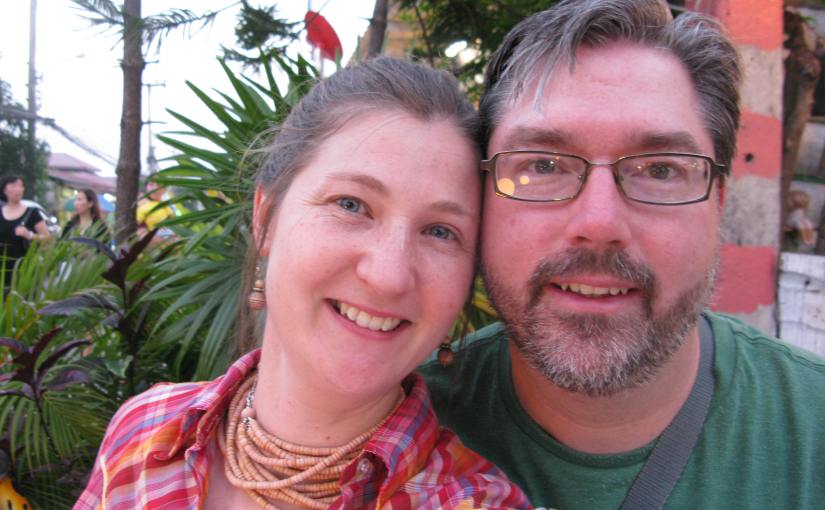 The following is an excerpt from a longer e-book I’m working on which should be published by the end of May, 2017:

If you are a leader who wants to make a positive cultural impact, you’ll need to manage your energy and focus your consumption so that you can leverage time differently. With the time you free up, you need to exercise your empathetic and creative muscles so that when the time comes to re-articulate values to your team or community, you’ll be able to do so with excellence. This is the formula for positive cultural impact.

For the sake of this blog post, I’m going to focus on why you need both empathy and creativity working in tandem, like iron and carbon coming together to form steel. The coming e-book will give people handles on how to do it.

Empathy without creativity results in a message that gets you less attention and lower retention. Think of this as sermonizing without excellence in storytelling. For example, a recent blog by Michele Perry in praise of the film “The Shack” notes that “…many Christian films miss the point of being films and are actually thinly veiled sermons that dismantle whatever creative effectiveness their story line might have had.” In context of my theme, Michele has pointed out that whatever empathy Christian filmmakers (previous to The Shack) may have had, (I have no doubt that their hearts ache for humans to find our Way,) has been compromised by poor storytelling, favoring empathy above creativity rather than melding the two. I have not yet gone to watch The Shack, perhaps because I’ve become wary of films branded as “Christian” for exactly the reason she pointed out. In fact, most of those films fail to get my attention. I won’t go see them. Fortunately for The Shack, reviews like Michele’s are going to buoy it along, and I’m now interested in seeing it.

Now let’s consider the flip side. What if your attempt to impact culture is heavily weighted toward creativity but has little sense of empathy? It’s no surprise to anyone that artists are interested in influencing culture; their motives may be rooted in empathy or something more self-serving, for example, fame or self-glorification. In the Modern Art movement, artists began speaking to an ever-narrowing, increasingly esoteric group of elites. Most of my friends scorned artists like Thomas Kinkade throughout our twenties, but as I’ve thought further about his work, I realize that his idea was to communicate to a much broader audience who wanted to look at something pleasant, welcoming, relaxing and inviting, images of cottages where they could imagine themselves at peace. And Kinkade cared about people who wanted that. Those same people never felt that Modern and Postmodern artists cared one whit about whether or not they “got it.” Kinkade’s commercial success was looked down upon by the elite postmodern highbrow gallery artists, but out of a certain empathy he spoke to a broader audience, using a great deal of creativity in the process, and earned both attention and a certain level of retention, too. Here’s a blog that’s a couple years old, but was published three years after his death at age 54, noting that his signed and numbered lithographs are likely to continue increasing in value. Long term, that remains to be seen, and monetary value is only one way of measuring retention. Another way to look at it is that if the monetary value is going up, that means people are keeping their lithographs — which means they’re either speculating, or they genuinely continue to appreciate his message and the values his work spoke about. Some might put his work in the same camp as those cheesy Christian movies which do a poor job of storytelling, but the truth is that Kinkade was a masterful painter whose technique may have been formulaic, but whose storytelling moved a generation of people to buy his paintings when other painters struggled to get any attention. (And when it comes to formulaic storytelling, Hollywood is all about that, so formulas are not a problem. Experimenters can search for new formulas, but there’s nothing wrong with using a recipe whether you’re baking chocolate-chip cookies or telling a story.)

I know, that’s a lot about art, and may mislead you to think that you will have to make a movie like The Shack or paint like Kinkade to make a positive cultural impact in your family, on your team at work, in your nonprofit organization. Not so. Use what you have, both exercising and building the muscles you have for empathy, and also those for creativity, so that your message will be driven by caring for others and delivered in a way they can appreciate, enjoy and remember for a long time.

Going back to the iron and carbon makes steel analogy, a good steel is both stronger and more flexible than either of its two main parts. The fusion of empathy and creativity will give your leadership both strength and flexibility, too.

Soon I’ll be releasing a how to course online, complete with a longer e-book, videos, a workbook, and a place for community.

Note — if you’re in the Goshen, Indiana area and would like to sit in on the live audience  video taping of the course instruction, that will be happening at Art House on April 18 at 7 PM, and is free for the public to attend.

Second note — if you’d like to get a copy of this e-book when it’s done, please email me at adam.fleming.lifecoach@gmail.com, reference this blog post, and I’ll put you on the email list for a FREE copy! 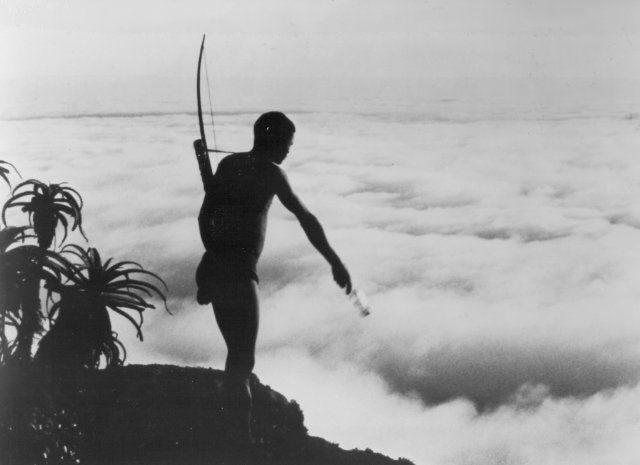 I wouldn’t be able to complete my next book without significant time in the hedgerows. To and from my local coffeehouse, or the bank, I can walk instead of drive. Often times when I walk I arrive with better thoughts to write down quickly; instead of spending eight hours in a day typing, I have to get out and move for a while.

The thinking isn’t done directly. My hedgerows, which are often just alleyways in a mid-sized Midwestern town, don’t have blackberries growing. Instead, I pick aluminum cans. Taleb points out the irony of having a valet carry your suitcases to the hotel room, and later lifting weights in the hotel’s exercise room.

Like Taleb, I cannot see the value in paying for a gym membership. Supposedly they motivate you to work out more often since you’ve committed your dollars, but this doesn’t always work for people and ends up being a profit center for the gym. Instead, I get paid to exercise and think. When I walk I pick up aluminum cans. Perhaps I look as though I’m a bum, picking up other’s trash, but there are several benefits to this method. First, of course I can cash in the cans after I accumulate quite a few, and this helps fund my non-profit’s travel budget. Second, I beautify my city. Third, like blackberries or other delicacies one might hope to find, it gives me something to keep my eyes peeled for. There’s something fun in finding that can and scooping it into my bag.

In some ways, I’m combining exercise, thinking time (space I need to be able to be creative later), cleaning up my town, and there’s even a little compensation for it.

The point is, you may not live in rural England, with its beautiful hedges and idyllic scenery. Your town may be noisy, your streets may be dirty, but practicing hedgerows is really getting yourself in shape to go to the edge of the world.

They aren’t the same thing. I think that, like Xi in The Gods Must Be Crazy, our walking may take us to the edge of the world:

Xi was angry with the gods. He shouted, “Take back your thing! We don`t want it! Look at the trouble it brought. “

The gods did not take it back.

He shouted, “You must be crazy to send us this thing! Take it back!“
Then he shouted, “Look out! Look out!“

But he spoke too late and the thing felled his daughter Dani.
Xi carried the thing away from the shelter and buried it.
That evening, there was no laughter and no chatter around the family fire.
A strange feeling of shame had come over the family…and they were very quiet.
Xi said, “I have buried the thing. It will not make us unhappy again. “
That night, a hyena smelled the blood on the thing, and dug it up.
A bad-tempered warthog chased the hyena away and it dropped the thing.
The next day, Dani found it. Her brother Toma heard her playing on it and said, “Let me try. Let me try too. “
That night the family was very unhappy. They began to talk about this thing. They did not have a name for it. They called it the “evil thing. “
Gaboo said, “Perhaps the gods were absent-minded… when they dropped the evil thing on the earth.
They`ve always sent only good things, like rain, trees, roots and berries to eat.
We are their children and they love us. But now they`ve sent this evil thing. “
Xi said, “The thing does not belong on the earth. Tomorrow I will take it to the end
of the earth and throw it off. “
Gobo said, “I think the end of the earth must be very far. I think you`ll have to walk for 20 days. Perhaps 40. “
Xi said, “I will start walking tomorrow. “

It is much harder to find the edge of the world when we haven’t been walking down the hedgerows. Will you start walking tomorrow?

Check the archives for more content on the hedgerows idea.