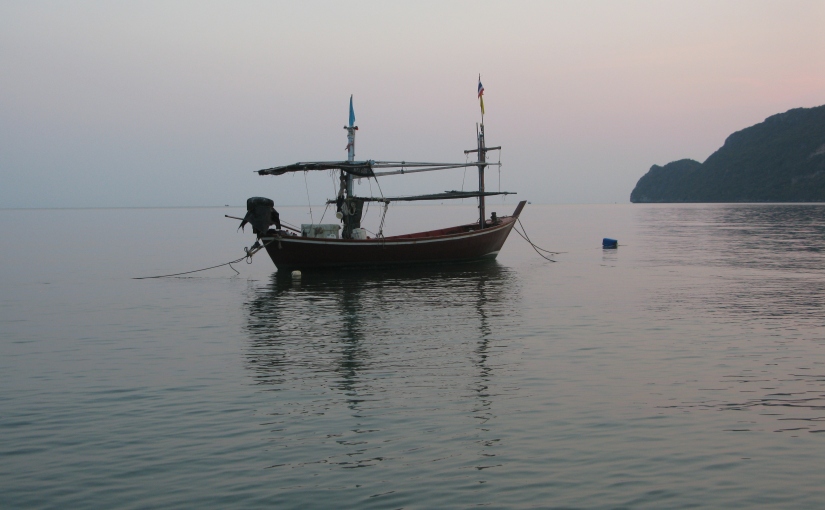 The raft which nearly fell apart as they shot the rapids has been repaired, and looks more like a barge; there are sides to the raft now (what bargemen call gunwales). She still rides low in the water, but comfortably, like a blanket on top of a sleeping baby. There is no current. The boat is propelled now by harnessed mules walking a path on shore; they wait for some time as a lock behind them closes and the waters rise.

Here is where the waters of our river mix with those from another river, The Captain shouts. He dips a jar into the canal and fills it, then a second jar, which he drinks. She thinks he may even seem a little too happy about it.

But then your river is no longer pure! The Stranger exclaims.

Ah, but you see, that delicious water I gave you when you first sat down with me is a mix not only of different places on our river, but of all rivers. After all, don’t you see that all rivers flow to the same ocean, so long as they stoop low enough to deliver what they have to her?

So why not simply go to the ocean?

That’s a great question, he shouts over the creaking of the gears on the lock ahead of them, but we’ll have to talk about it later. Just think! Not only of the impact of the other river on our river, but also of the impact of our river on those who drink from the water over the hills here, beyond the canal!

Another boat meets them in the middle of the next lock, heading toward our river. A captain greets the boatswain with a coarse but good-natured sort of language: YAWP, HO THERE, YE SCALAWAG ANYWAY! BULLOCKS TO THY MANGY BARGE! SLIDE AWAY, DRIFTER! She wonders what business such a captain could possibly have on our peaceful river.

It’s not only our river, says the boatswain, as if intercepting her thoughts. Nobody owns the river. He may come and go, or he may stay! He may speak his language or learn to speak ours. But we’d see nothing of him, and receive nothing from him, if not for this canal!

Journey along a canal is slow work. It takes much time for the waters to mix and blend to the right height so that one can proceed in either direction. The boatswain seemed to love waiting for the water in the locks to fill or empty so that he could move along this way, towards a neighboring river, but, for his visitor, it was all very technical. She worried that he might be drinking too much of the water. She worried it might be tainted! He called to captains coming from the other river, and even though they were from a different country, a different watershed, at times he seemed to have more in common with them than with the villagers who lived along his own river. In a sense, the canal was a place for him to reunite with a long lost cousin-tribe. It was clear that he loved them. They could insult him all day long, and he’d just smile and say, YAWP! HO THERE, GOOD TO SEE YOU, TOO, AND THY FINE BARGE! TIE ON, NOW, COME ABOARD! Indeed, some of them do come aboard and converse with him over the many finer aspects of boating. They learn from each other, but she falls asleep again.

It is that time of night when you think the day will appear any moment. When you hold vigil, around four o’clock you begin to believe that you see the sun beginning to rise, the light in the distance to the east begin to filter through. It is a mirage, perhaps spurred by the fact that your eyes have dilated and are letting in as much light as they can. But it is not yet day. He feeds her the fifth piece of bread. This is thin, and tastes as though frosted, dusted with powdered sugar. The sweetness is a dessert so late at night, and comes with another cup of tea. She eats, she drinks. She closes her eyes, ready for the next stage of the journey in the night.

They’re standing on a houseboat similar to his, but she sees that it is tethered now to dozens of other houseboats, forming a community on the water. She follows the boatswain as he walks across the planks of one craft, over small causeways to the next boat. The boats are not moving up or down the river. In fact, these floating houses have come to a marshy area as the river breaks up into dozens of channels, forming a delta on its way to the sea, rich silt deposits forming low islands, scattered about.

We have come to the place where my neighbors live, says the boatswain. The members of our tribe among them still float like we do, all their days, but these boats have really ceased to be boats, and became part of the villages along the shore, even larger towns sometimes. Look how they are tethered together from the shore of that island to the shore of the next. These boats are neighborhoods, bridges, a part of the larger city. Their neighbors farm these lands, growing rice and other vegetables. The members of our tribe dig wells for everyone, irrigate the crops with them, and the water they draw up. We also share in their water.

He hands a vessel across the bow to a man in the next boat, dressed very much as he is; the same shaved bald head, the same russet moustache, similar inked markings along the arms. The other boatswain takes the jar and leaps for shore, where he runs to a well, dips and draws, and returns with water.

Here you are, brother. Something for your people to drink as they sing.

These are my contemporaries. They are commissioned to draw and carry water for the farmers near their river. Sometimes we sing their songs on our boats. Sometimes they sing ours. They are not the ancients, they are not distant cousins on another river, and they are not our descendants. One day, we’ll all bind our boats together and head out on the ocean … but we’re not ready yet to speak of that.

The voyager opens her eyes again. Dawn. A breakfast in her hand. It tastes like nothing; it tastes like everything. It may have a peppery fire one moment, a sweetness, a tanginess, or a fishiness the next moment. It is, in a word, delicious.

Along with it a cup of coffee.

Coffee? She says. Aren’t we to sleep again, then?

No, says the captain, Now you may see our waters. But not in a dream – we have nowhere but here to go!

A Village on the River

She looks about and sees the same thing she saw the night before. A community springs to life, eight or twelve different boats connected, a floating village. She looks up the river and thinks of the headwaters, the canyons, the rapids. She looks to the west side and sees the canal, and downriver just a few miles she can make out the shapes of city, farms and floating boat-town at the delta. She realizes that last night she didn’t really see this place at all. She only saw a place to sit that wasn’t the dusty road. A lithe boy dives into the water, naked, splashing water on her cushions. It is time to rise!

We draw our own water on this spot, he says. We have our own songs, our little village. When I sang last night, did you think I sang alone? No, the men and women on the other boats alongside sang with me. The children even sing in their sleep, it seems. He glances with pride at his tiny ship and the vessels of his closest neighbors, his tribe. We serve our fish and make our bread for the voyagers who come aboard, and we love our spot on the river the most, though all other parts are needed, and we borrow from them. And there are many tributaries to this river we have not seen. This water beneath us comes from far and wide. We do not even know its extent. But as I have mentioned, it all flows to the same ocean.

She looked him in the eyes, and she said, and now it is time to speak of the ocean, is it not?